For four days from Friday 1 to Monday 4 of November 2019, Larry Kunz led a team on Phases 6 and 7 of the Bowers Springs cleanup.

Friday: An additional 100 ft of edging trimmed and positioned in a short session delayed by the high winds.  The timbers put in place, but not secured, since they may need to be moved to get the Kubota through with the tailings on Monday.

Saturday: Hinglan and Larry worked about 4 hours on the path edging and bittersweet removal. Total path length ready to receive loam tailings on Monday now up to about 300 ft. Beach area and a short section of the path toward the east end of the pond all that remains. Larry hoped to get to that on Sunday. The bittersweet photo speaks for itself – thanks for heroic work by Hinglan. 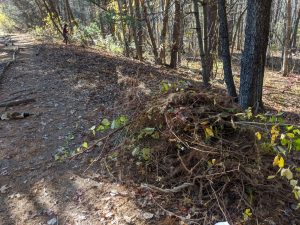 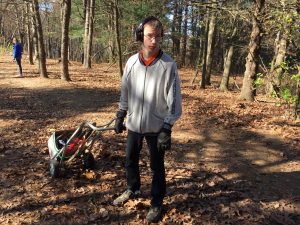 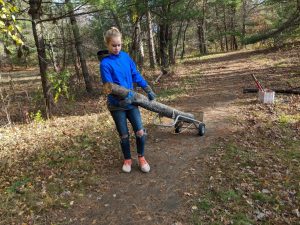 Keith was expected with  Kubota around 9 on Monday to begin filling in the root-riddled trail sections while the supply of loam tailings lasts.

And thanks to Sunday’s volunteers. 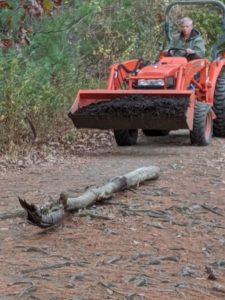 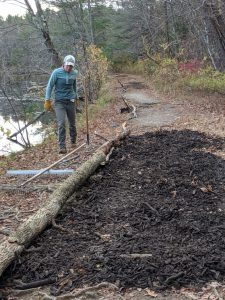 Keith (with his Kubota) and Rebecca spent the better part of Monday on site with Larry hauling distributing and raking-in almost two dump-truckloads of tailings onto the root-riddled paths. The team received  numerous kudos from walkers as the work progressed, peppered with stories of someone they’d known who’d turned an ankle or fallen because of those “darn” roots.

Here’s what it looks like now approaching, passing, and leaving the beach area. Notice that the roots are still bare on the pond side of the trail. That’s because the beach itself drains into the pond and thus requires a higher level of review for any imported material. Rebecca’s working on that with ConCom and the area will be restored once we have the standards established. 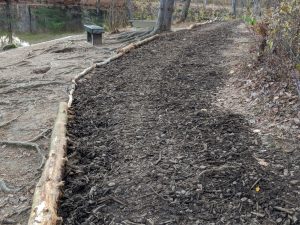 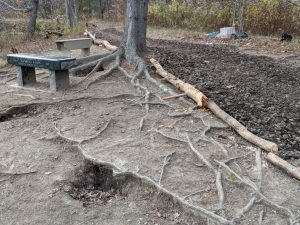 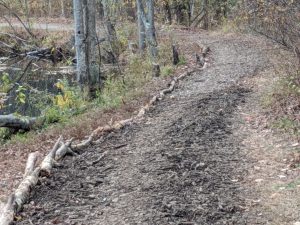 Once this section trail is completed (about 400 ft), the team is considering doing a similar restoration on the trail between the two ponds where the root exposure is less severe, but is still presenting a tripping hazard.

Thanks again to all our volunteers. We’re making progress.