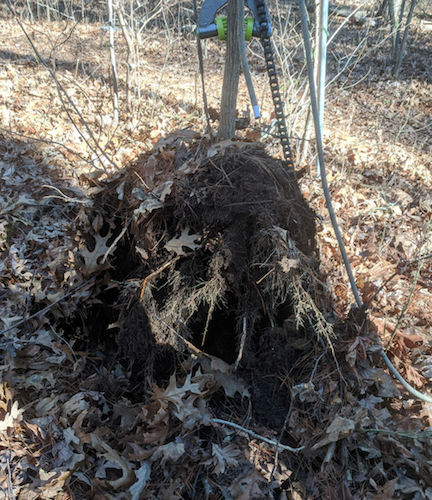 Winged euonymus is an invasive plant and it’s all over Bolton’s conservation areas. One of the worst affected areas is the land near the Lime Kiln where the Trails Committee had a successful day of clearance earlier in 2021. However, some of the plants had become too large even for the equipment that had been borrowed for that event.

So on 17 December 2021 when there was some unseasonal mild weather with no frost on the ground, Bob Roemer applied his ingenuity to the problem and created his “euonymus vertical extraction technique”. With the help of Alice Roemer he tried it on the largest plants (almost trees!) left after the Trail Committee’s marathon removal effort.

It consists of a tripod of metal electrical conduit with a suspended industrial Yale “Pull-Lift” to which is attached a “Brush Grubber” typically used by farmers & ranchers to remove buckthorn and mesquite.  He had tried a similar approach last year with a come-along pulling horizontally from a large nearby tree; It didn’t work well (understatement!). The combination of a vertical pull and a much more robust lifting device did the trick…quite easily.

The tripod has a welded head assembly similar to the much larger version used to lift 3-500 lb. rocks back into his stone wall during maintenance.  However the tripod is made of 1” conduit and can be easily carried by 1 person.  The bottoms of the feet fit into oak “shoes” with large anchoring spikes so they don’t sink into the ground.