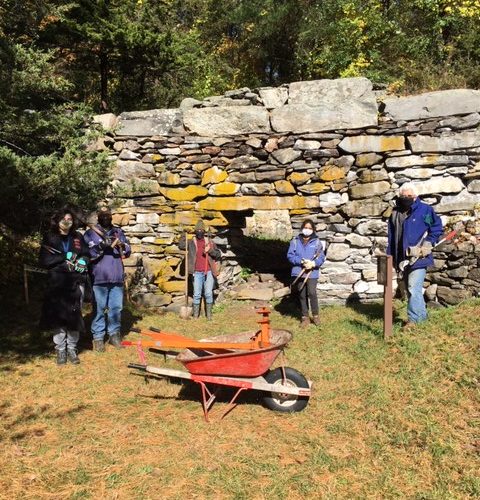 On Saturday October 17, a socially-distanced team led by Rebecca Longvall tackled the problem of out-of-control winged euonymus plants at the Lime Kiln. Bob Roemer was the primary organiser, but on the day Bob was indisposed and Rebecca took charge. Other workers were Hemali Parekh, Naomi Martin, Richard Caisse, Anna Caisse, and Gordon Taylor.

Winged euonymus has been a very popular plant for private gardens, but like many other “imports” it has started to take over from native New England plants. It is also known as “burning bush” because of its spectacular color in the Fall. Its red berries can be carried by birds and knocked off by passers. It spreads very quickly and can grow to be quite large. In order to reduce the spread, its important to remove the roots of existing plants while being careful to avoid spreading the berries.

There were about six volunteers that met at Bob Roemer’s workshop at 9:00 and. Bob had acquired three weed-wrenches for the day and the volunteers arrived equipped with tools of their own including loppers and shovels. The weather had been very wet that morning, but it cleared up just in time for the project. The team focussed on plants close to the trail at the top of the Lime Kiln.

Roots were pulled up by hand when possible, but in many cases the plants had become very large and the weed wrenches were extremely useful. The upper parts of the plants separated from the roots and left to break down in the woods. The roots were collected for disposal by burning. 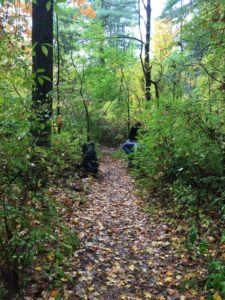 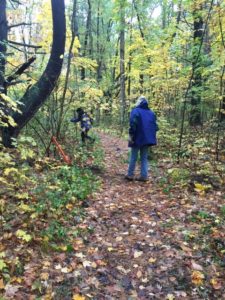 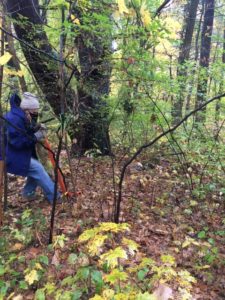 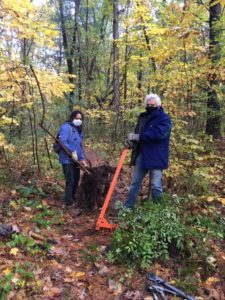 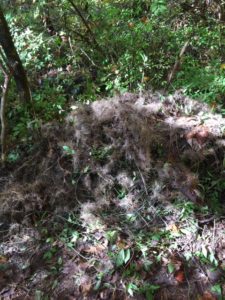